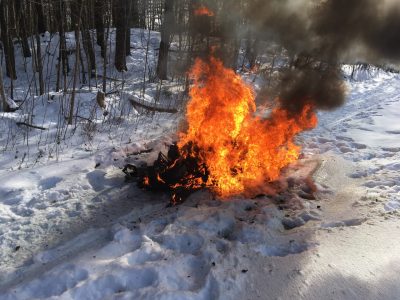 WOLFEBORO, NH – A Snowmobile was destroyed in a fire on a local trail in Wolfeboro. According to Wolfeboro Fire-Rescue they were called snow machine fire between River Street and Mast Landing at around 1 pm Wednesday. When crews arrived they found the 2018 Skidoo Renegade fully engulfed in flame on the Cotton Valley Rail Trail.

Luckily the rider, identified as Nicholas Mauch of Southborough, Massachusetts, was uninjured the machine however was a total loss. Mauch told fire officials that he had just purchased the snowmobile the day before and that it was brand new.

The fire was declared under control about thirty minutes after the call, with fire crews leaving the scene at around 2pm.

The cause of the fire remains under investigation.