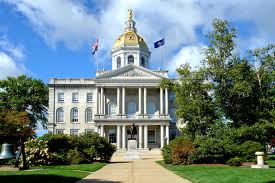 CONCORD, NH  – New Hampshire lawmakers are back to work and finishing up old business. The House and Senate start their second half of the two-year Legislative session today. They will meet to vote on more than 100 bills they delayed action on last year. The House is expected to take at least two days to plow through its list, while the Senate calendar is considerably shorter.

Among the bills up for consideration in the senate are two related bills one that would eliminate the statute of limitations on prosecuting any sexual assault or incest case and another that would remove the limit in cases when the victims were under age 18. The Senate Judiciary Committee is recommending that the first bill be killed and the second be amended to create a commission to study the issue.

The Senate Committee on elections law is recommending passage by the full Senate of a bill aimed at ending confusion over the terms “residency” and “domicile” for voting purposes by making them synonymous. Supporters argue doing so would reduce election fraud and ensure that only New Hampshire residents vote in the state, but opponents say it amounts to a poll tax because college students would have to declare residency in order to vote, thus becoming subject to residency requirements such as obtaining a driver’s license and registering their cars.

When it comes to the House they will consider a bill requiring blood testing for lead in all children age 2 and under, bringing the action level for lead in a child’s blood in line with federal standards and providing $6 million in loan guarantees for property owners for abatement projects. The Senate-passed version would have provided grants instead of loans. Governor Chris Sununu recently voiced his support of the bill.

One major bill up for consideration in the House is an overhauled version of a senate passed bill that would provide parents with the state’s basic per-pupil grant of roughly $3,000 to be used for private school tuition or home schooling. To qualify, parents would have to have a household income less than or equal to 300 percent of the federal poverty limit, live in an under performing school district, have a child with an individual education plan or tried unsuccessfully to enroll a child in a charter school or get an education tax credit. Opponents argued the program would violate the state Constitution, which says no person, shall be compelled to pay to support a religious school.

Lawmakers will also be looking at a bill that seeks to create a family and medical leave insurance program. The bill insurance would providing leave for the birth, adoption or fostering of a child or serious illness, including substance use disorders, of a spouse, civil union partner, child, parent or grandparent. Supporters say it will address key challenges in the state, including maintaining its workforce and helping the state recover from the opioid crisis. Opponents say it is just a tax disguised as an insurance premium.