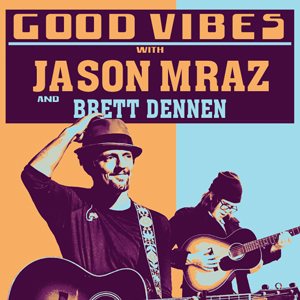 Tune in to 93.5 WMWV July 30TH – August 3rd for your chance to win tickets to see Jason Mraz and Brett Dennen live at Bank of New Hampshire Pavilion at Meadowbrook!

California-based singer/songwriter Jason Mraz makes laid-back, melodic pop with stylistic nods toward folk, jam band music, hip-hop, and soft rock. Since coming to the public’s attention with his 2002 hit single “The Remedy (Don’t Worry)”, Mraz has proven himself to be a reliable pop craftsman whose crowd-pleasing melodies can encompass both cheeky humor and earnest sincerity.


Born in Mechanicsville, Virginia, in 1977, Mraz grew up amidst the sounds of the Dave Matthews Band and local roots musicians the Agents of Good Roots. However, it was Mraz’s interest and participation in musical theater that served as his first introduction to music. Following high school, he moved to New York to attend the American Musical and Dramatic Academy, but dropped out a year later when he took up the guitar and began to focus on songwriting. Nonetheless, Mraz’s training as a vocalist would later show itself on his debut album, which was marked by the pure clarity of his tenor range.

Over his career, Mraz has won two Grammy Awards and received two additional nominations, and has also won two Teen Choice Awards, a People’s Choice Award and the Hal David Songwriters Hall of Fame Award. He has earned Platinum and multi-Platinum certifications in over 20 countries, and has toured in North America, South America, Europe, Asia, Australia, the Middle East and parts of Africa. As of July 2014, Mraz has sold over seven million albums and over 11.5 million downloaded singles.

Amiable West Coast singer/songwriter Brett Dennen first drew attention in 2004 with the single “Desert Sunrise.” The tune, with its easy groove and soulful phrasing, garnered enough spins on KCRW to warrant the release of his self-titled debut the following year. Stylistically, Dennen’s thoughtful, laid-back tunes fit in with the burgeoning singer/songwriter scene that had produced stars like Jason Mraz and Jack Johnson..

When he wasn’t headlining his own tours, he could be found opening bills for Dave Matthews, Taj Mahal, Ziggy Marley, and Jackson Browne, among others. Dennen’s fifth studio effort, Smoke and Mirrors, was a success and landed Dennen in Billboard’s Top 200 for the first time.

Worried you may not win? Then pick up your tickets now at banknhpavilion.com.