Snowmobile Crash with Injury in Gorham

Gorham: On the late morning of Friday, January 29, 2021, a Massachusetts man sustained significant injuries after crashing his rented snowmobile on the Town Access Trail a short distance from Main Street in Gorham.

It was determined that Konstantin Ioannidis, 30, of Watertown, MA had been operating a snowmobile as part of a guided tour group.  At approximately 11:54 AM, Ioannidis lost control of his machine and subsequently went off of the trail and stuck a tree.  Ioannidis was thrown from the machine upon impact and sustained serious injuries a result of the crash.  Immediately following the crash, a 911 call was placed from the scene to request medical assistance.

A response from Gorham Fire and EMS, Gorham Police Department and Conservation Officers began.  The crash scene was located in very close proximity to Bellevue Place, which provided easy access for responding rescue personnel.  Ioannidis was subsequently taken from the scene by Gorham Ambulance to Androscoggin Valley Hospital in Berlin for further evaluation and treatment of injuries.

Conservation Officers believe inexperience to be the primary factor in this crash.  It was determined that this had been the first time Ioannidis had ever been snowmobiling and that the crash occurred minutes into his ride.

Randolph: At approximately 10:00 AM on Saturday, January 30th, 2021, a woman sustained serious, but non-life threatening injuries when she lost control of the rental snowmobile she had been operating and collided with a tree. The incident occurred on Trail 12a in the area of the Warming Hut in the Town of Randolph. The operator of the snowmobile was identified as Colleen M. Legros, age 43, of North Andover, Massachusetts.

After the collision 911 was contacted and notifications were made to emergency personnel about the incident.  First responders from the Randolph Fire Department, Gorham Fire Department and Gorham Ambulance responded to the scene.  A Conservation Officer with the New Hampshire Fish and Game Department also responded to both the scene and hospital to assist with the rescue and investigation.  Due to the nature of the injuries to the operator and the distance from any maintained road, the operator was transported from the scene of the collision to an awaiting ambulance on a tracked utility terrain vehicle (UTV). Ultimately, the operator was transported by Gorham Ambulance to Androscoggin Valley Hospital in Berlin for further evaluation and treatment.

According to the operator, she had started her ride approximately an hour before the incident occurred and had very little experience operating a snowmobile. Based on information provided by the operator and a witness, the snow machine was making a turn in the area of the Warming Hut when she suddenly mistook the throttle for the brake and accelerated abruptly over a snow bank, through the air and into a tree. The operator was wearing a helmet and had appropriate gear for the conditions. Operator inexperience is considered the primary contributing factor in the collision. Alcohol or drugs were not a factor in the collision. 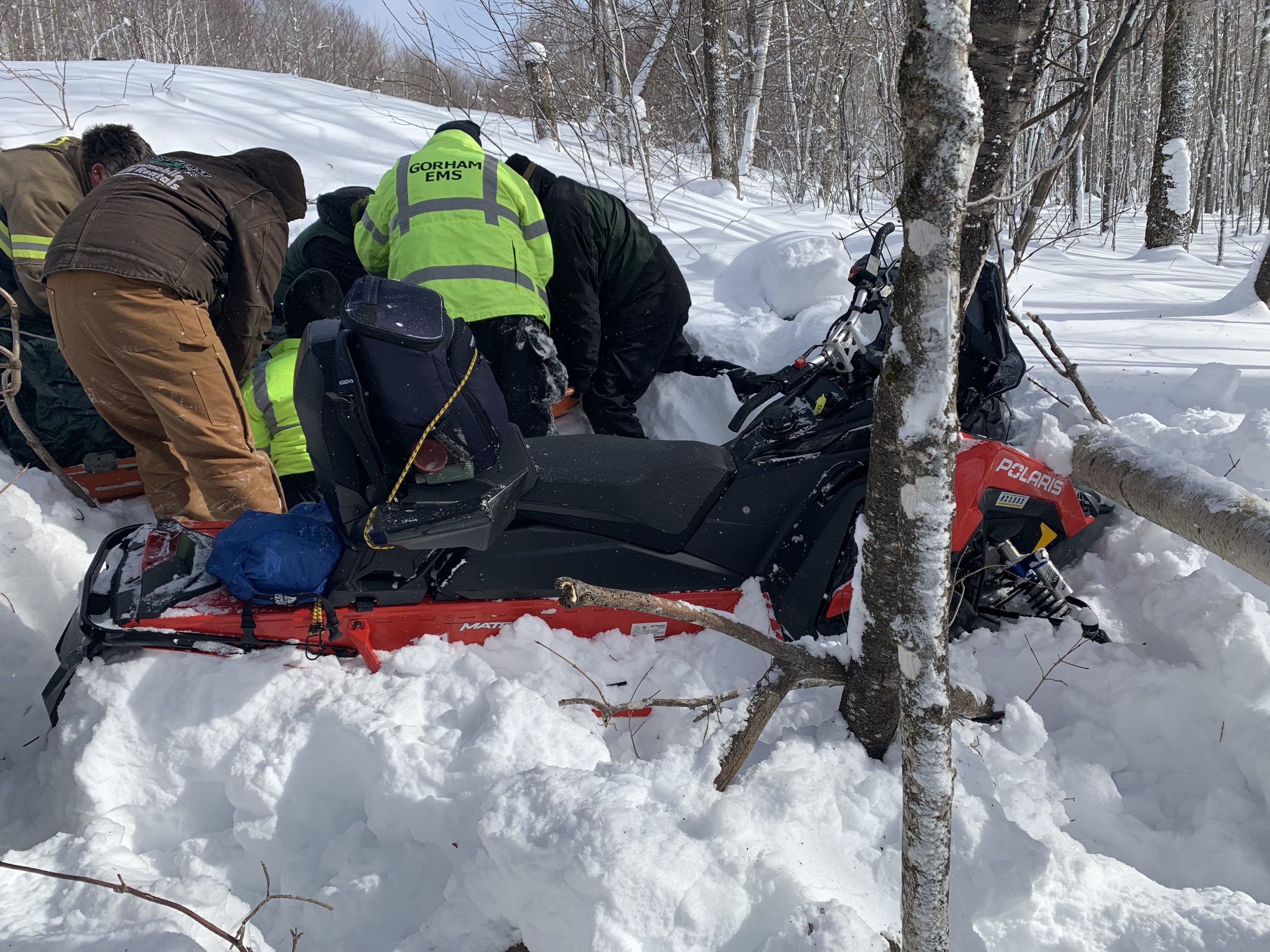 BARTLETT: Over the weekend Conservation Officers responded to two separate snow mobile crashes in Bartlett.  On Saturday, January 30th shortly after 1:00 PM New Hampshire Fish and Game was notified that a snowmobile had crashed on the Stanley Brook Trail in Bartlett. The operator was Joseph Cochran, 57 of Chelsea, MA.  He was operating a borrowed snow machine.  He made a hard turn and was thrown from the machine.  Members of his party were able to transport him by snow machine back to town and he was treated by members of the Bartlett / Jackson Ambulance service for serious but non-life threatening injuries.  He was then relayed by ambulance to the Memorial Hospital in North Conway for additional care.

A second snow machine accident occurred shortly after 11:00 AM in the same area on Sunday, January 31st Conservation Officers were notified of a snow machine accident on the Lower Haystack Trail in Bartlett.  Dorothy Seitz, 60 of Colchester, CT was operating a rented snow machine when she accelerated rapidly while negotiating a left hand turn.  Her machine left the trail and impacted a tree.  She suffered injuries to her head and both wrists. Personnel from Bartlett / Jackson Ambulance and the Bartlett Police Department responded to the scene. She was placed in a rescue sled and transported out to a waiting ambulance that took her to the Memorial Hospital in North Conway for additional care.  No further details on either accident are available at this time.

CHATHAM:  On Sunday, January 31st shortly before 3:00 PM David Wagner, 62 of Gorham, ME phoned 911 after losing the Baldface Circle Trail in the area of North Baldface Mountain. Coordinates from the call placed him nearly 1,000 feet of trail and 300 feet below it in elevation. David was able to regain the trail at the summit of North Baldface and planned to retrace his route back to the trailhead a distance of 5.0 miles. Cell phone service is poor in the area.  Shorly after 5:00 PM David was able to call in and relay his location before the call dropped.  He was nearly 4.0 miles from the trailhead at that time.  Ultimately, he was well equipped and was able to continue out on his own power. He arrived at the trailhead shortly before 7:30 PM.