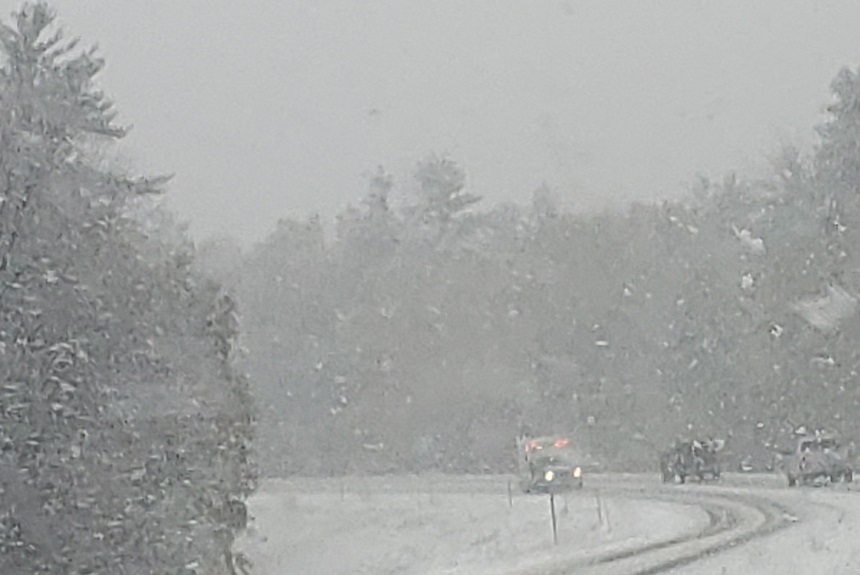 An ambulance travels down Eastman Road in Conway during the October 27th nor’easter. ~ Photo courtesy of Christian Mower

CONWAY,NH – The first nor’easter of the season caught many valley residents off guard leading to dozens of calls for help. The nor’easter, which was the remnants of what used to be Hurricane Willa, dumped snow on the Mount Washington valley in a matter of hours. Lt. Mattei from the Conway Police Department said that they had a 67 calls for service from noon to 5:00 pm with the majority of them being storm related.

Lt. Mattie said they had 11 accidents called in with many vehicles sliding off roadways, luckily no major injuries were reported. Conway Police said that they had 4 officers on going from call to call but many people who had slid off the roads were able to get out prior to an officer arriving on scene.

According to the police log there were so many calls for vehicles off the road that at one point in time the logs note that the tow trucks were all tied up and leaving one individual stuck for almost an hour.

Police were called to multiple reports of trees on power lines including lines down on West Side Road, East Conway Road and Route 16 in Conway near Conway Market Place. Power was out in many areas around Conway, as well as in Bartlett, Intervale, and Fryeburg during the storm.

Lt. Mattie expressed his gratitude to everyone who helped during the storm saying “I want to thank our officers who were responding to the calls in less than desirable driving conditions.  I would like to give a big thank you to our two dispatchers, Dispatcher McGinley and Dispatcher Gillis, who answered all of these calls with great professionalism and patience.  Finally, I would like to thank the citizens and friends of Conway who displayed great patience during the storm helped one another through our first major winter weather event.  Practice makes perfect and I’m sure we will see a few more of these days in the near future.”