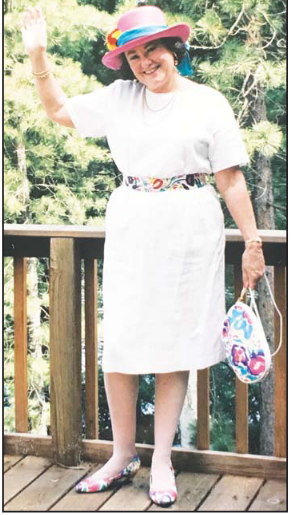 Joan Sherman enriched the life of Mount Washington Valley through her co-ownership of radio station WMWV and her dedication to numerous arts and culture associations. She died from complications of Alzheimer’s Disease on Nov. 19, 2020, at Merri-man House in North Conway, N.H. Joanie often said that she was drawn to New Hampshire after seeing the movie, The Devil and Daniel Webster, when she was a little girl. For her, it was a dream come true to move here. Joanie loved New Hampshire’s small towns, tight-knit communities, and rural roots. Living here both nurtured and inspired her. Born on Sept. 7, 1929, in New York City, Joanie grew up in Great Neck, Long Island, and attended Northampton School for Girls in Massachusetts. After graduating, she studied at Juilliard School of Music, Barnard College, and the Peabody Music School. In 1948, she married Lawrence (Skip) Sherman. After Skip got his journalism degree at the University of Iowa in 1955, they moved their family to New England. He worked as a reporter for The Springfield Union and The Providence Journal. Meanwhile, Joanie began a career in sales, which led to her learning the radio business at WERI in Westerly, R.I. In 1959, they moved to Conway, N.H., to manage the AM radio station WBNC, which had been purchased by Joanie’s boss at WERI. A year later, they bought the station, and in 1968 they started a sister FM station, WMWV. As sales manager, Joanie immediately slashed the price of advertising, enabling any business, however big or small, to broadcast its message. She also founded the station’s long-running annual gardening contest for amateur and professional gardeners. Skip managed the news as well as the music programming, which soon displayed his signature touch: a spicy mix of jazz, country, rock and roll, and classical music. Meanwhile, the station’s doors opened to the community. Its reporters and announcers were everywhere: dog sled races, high school concerts, tennis tournaments, the Fryeburg Fair, you name it. Radio interviews introduced listeners to local historians, naturalists, musicians, and authors, and the morning weather report gave everyone a head start by rating the day up to fifty cents. “It’s a real fifty-center” became insider slang for another beautiful day in Mount Washington Valley.In 1997, Joanie and Skip sold the station and retired. Amicably divorced in 2002, they remained close friends. As a woman in broadcasting, Joanie broke new ground. One of the first women in sales, management, and ownership, she served on the board of the New Hampshire Association of Broadcasters and, in 1965, was the first woman to address the Radio Advertising Bureau in New York City. Moreover, the legacy of the station she and Skip created has endured. In addition to her work in sales and broadcasting, crafts and fine art were always central to Joanie’s life. She won awards and recognition for her embroidery and for her hooked rugs and also taught crafts to community groups. In the 1990s, she studied at the Savannah College of Art and Design in Georgia and at the Portland School of Art in Maine, and she took workshops in creative writing. The result was an autobiographical series of paintings and short essays. In 1992, the collection, “Dreams & Memories: Paintings and Stories,” was exhibited at the Idia Center in Intervale, N.H. Selections were featured in other exhibitions, notably the New Hampshire Historical Society’s folk art exhibition, “Traditional Roots, Con-temporary Expressions,” in 1994, and subsequently at the Capitol Rotunda in Washington, D.C. The entire collection was published in 1994. An indefatigable extrovert, Joanie was devoted to her community. (As a kid, when she realized that she couldn’t meet everyone in the whole world, she burst into tears.) She served on many arts organizations including Conway’s Home Industries, the League of New Hampshire Craftsmen, the Mount Washington Valley Arts Association, and Arts Jubilee. She also helped to establish Planned Parenthood in New Hampshire and worked to bring community mental health services to Carroll County. In later life, she became a member and enthusiastic supporter of the Unitarian Universalist Fellowship of the Eastern Slopes. In 2000, Joanie and Skip were the recipients of the prestigious Bob Morrell Award, bestowed by the Mount Washington Valley Economic Council for civic entrepreneurship. Joanie faced many challenges in her life. She had dyslexia and suffered from bipolar disorder with recurring depressions. However, she always described herself as a fighter and believed that we could all make the world a better place for each other. As it is for many who struggle, “Somewhere Over the Rainbow” was her personal anthem. Happily, in recent years she was able to sing that song a lot with friends and family. In addition to her former husband Skip Sherman, Joanie is survived by their two daughters, Sarah Sherman, married to Jamie Calderwood; and Carrie Sherman, married to Terry Whiting. Other survivors include Joanie’s grandson, Peter Calderwood; her sister, Gretchen Horton; and her brother, Ned Thanhouser. Joanie’s family would like to express their gratitude to Merriman House at Memorial Hospital in North Conway, where Joanie spent her last three and a half years. A celebration of Joanie’s life will be held when it’s safe for friends and family to gather.

The current radio station family send condolences to Skip, Sarah, Carrie and their families. This obituary, written by Sarah and Carrie, first appeared in The Conway Daily Sun on April 16, 2021.