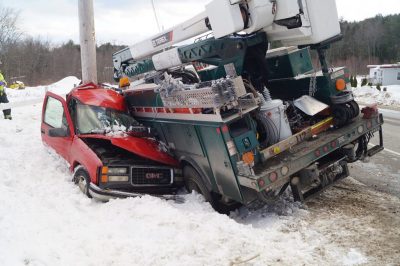 NORWAY, ME (AP) – Police say a Maine man suffered a laceration to his head after his truck was crushed by a utility bucket truck.

The Sun Journal reports Cummings was not injured in the crash. Investigator Rob Federico says Sanborn was taken by ambulance to an area hospital. A hospital spokesman says Sanborn was no longer in the hospital Tuesday night.

The collision pushed the pickup truck into a Central Maine Power Co. pole, which was not damaged.

The crash remains under investigation.