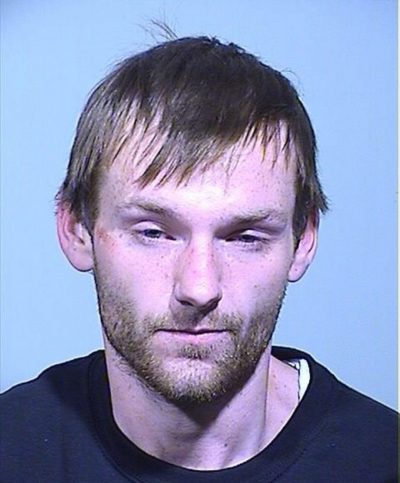 25-year-old George Sproul, of Bridgton Maine, was arrested after he allegedly fled from police in a stolen U-Haul truck ~ Photo courtesy of the Cumberland County Sheriff’s Office

BRIDGTON, ME – A Bridgton man is under arrest after leading police on a high speed chase in a U-haul Truck. According to the Cumberland County Sheriff’s Office a Bridgton Officer attempted to stop a pickup truck on Route 107 in Bridgton at around midnight last night, when the driver sped off at a high rate of speed.

After the officer discontinued the pursuit Police learned that the driver, 25-year-old George Sproul, was wanted in connection with an active burglary investigation being conducted by the Maine State Police.

Deputies from the Sheriff’s Office located the truck driving on Route 107 by of Long Hill Road in the town of Sebago, but Sproul allegedly continued to attempt to evade authorities. The Deputies continued to chase Sproul at high speeds, as other deputies set up spike mats at an upcoming intersection at Boundary Road and Pequaket Trail, Route 113. The spike mat flattened three out of the four tires and Sproul pulled over and surrendered.

Police identified the vehicle that Sproul was driving as a 2017 Dodge Ram U-Haul truck that had been rented by an acquaintance of Sproul’s but was never returned and had been reported stolen. Upon recovery of the vehicle, Police said they found that someone had attempted to spray-paint the white truck black.

Sproul was taken to the Cumberland County Jail with a NO BAIL status.

Authorities also said that other charges will be forthcoming after an investigation.