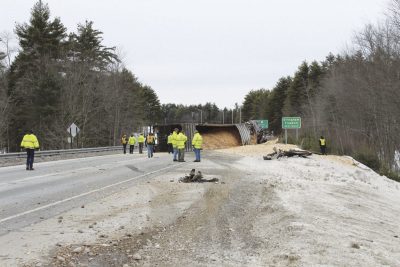 OSSIPEE, NH – Authorities have released the name of the driver killed in an accident in Ossipee. Ossipee police said that at 1:21 Tuesday afternoon 39-year-old Henry Doran from Enfield died at the scene after crashing into tractor trailer hauling wood chips.

Authorities said that Doran was headed south in a Carroll Tire light box truck on Route 16 just north of Pine River Road when he crossed the center line crashing head on into a Garland Lumber Co. Truck being driven by 42-year-old Joseph Breen of Moultronboro.

When police arrived they found the tractor trailer on its side with load of wood chips spilled into the roadway and the box truck in the middle of the road with significant damage.

Breen was not seriously injured in the accident.

Police said it is not yet known why Doran crossed into the North bound lane, however, speed is not believed to be a factor.

Route 16 was closed for about 5 hours while crews investigated the accident.