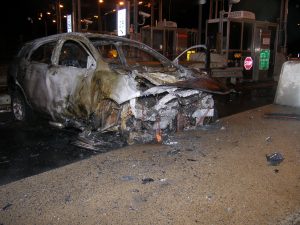 DOVER, NH – New Hampshire State Police say a driver died after his SUV crashed into a concrete barrier at a toll plaza and caught on fire.

Police said 39-year-old Justyn Tyndaal, of Rochester, New Hampshire, was traveling north on Route 16 in Dover when he lost control of his 2018 Chevrolet Equinox at around 2:10 am this morning. He crashed into the barrier while attempting through an EZ Pass lane at the Dover toll plaza.

Police said the SUV came to final rest perpendicular in the travel lane of the toll plaza and became engulfed in flames.

Tyndaal sustained serious injuries and had to be extracted from the vehicle. He was taken to a Portsmouth Regional Hospital, where he died.

Three northbound travel lanes at the toll plaza were closed for approximately 2 hours as Troopers conducted the on-scene investigation.

The crash remains under investigaton by the New Hampshire State Police Troop A.  Anyone with further information related to this crash or who witnessed this crash are encouraged to contact Trooper Eric Call at 603-223-8490 or by email at [email protected].nh.gov.