Representatives from ski areas, breweries, Ski NH, and the NH DTTD came out to celebrate the start of the ski season at the Ski 603 Winter Kickoff Saturday December first. ~ Photo courtesy of Ski NH

Ski NH said that the aim of the event was to provide a festive and relaxed atmosphere where ski areas could mix and mingle with guests to share information about 2018/19 ski area capital improvements, events, and products. Ski areas shared booths with New Hampshire breweries, distilleries, and wineries. 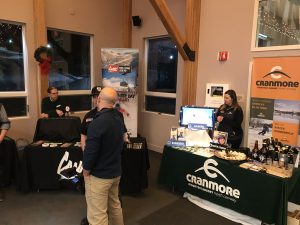 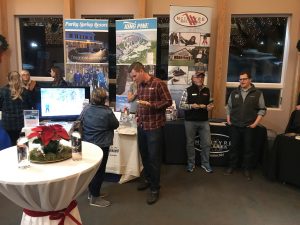 Representatives from Mount Washington Valley breweries, distilleries, and Ski areas hosted booths to give out samples and show off what they have planned for this season.

During the speaking part of the night, Taylor Caswell, the commissioner of the state Department of Business and Economic Affairs, announced the winter tourism forecast that more than 2.5 million overnight travelers are expected to spend $1.1 billion in the 2018-19 season.

Vicki Cimino, Director of the New Hampshire Department of Travel and Tourism, unveiled the 18/19 winter creative strategy for the Granite State. Manchester Mayor Joyce Craig—who learned to ski at McIntyre Ski Area—welcomed the crowd of more than 200 to what she hoped would become an annual event.

Jessyca Keeler, Executive Director of Ski New Hampshire, reported that the snowstorms of March left skiers and riders with a great finish to the 17/18 season, so people were excited about the 18/19 season starting. The constant snow storms this month and cold weather have elevated the excitement levels and those ski areas that were open for the Thanksgiving holiday weekend anecdotally reported that they saw great business levels. This most recent storm dropped over 15” at some ski areas.

With the early season natural snowfall throughout November and forecasts looking favorable for snowmaking in the coming weeks, the ski season in New Hampshire is off to a great start. Most alpine resorts are already open, as are several cross-country ski areas, and the remaining alpine areas are slated to open over the next few weeks.