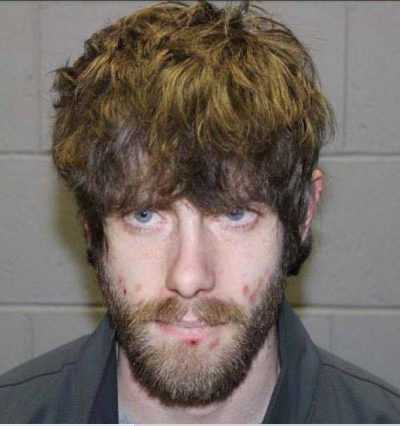 Police are seeking information on the location of 29-year-old John Williams, of Madison Maine. Williams is described as 5’6” 120 lbs, brown hair, with sides that are shaved, with a more hair on the top and blue eyes. – Photo Courtesy of Maine State Police

NORRIDGEWOCK, Maine (AP) — A Maine county sheriff on Thursday urged a man sought in the killing of a deputy to turn himself in and told a community to stay vigilant during a manhunt in what is believed to be the first killing of a law enforcement officer in Maine in nearly 30 years.

The fatal shooting of Somerset County Cpl. Eugene Cole on Wednesday in Norridgewock triggered an intensive search for 29-year-old John Williams in and around the heavily wooded rural community about 60 miles (96 kilometers) west of Bangor.

“I’m asking John Williams, personally, if you are listening to my words today, I implore you to turn yourself in,” Somerset County Sheriff Dale Lancaster said at a news conference. He said authorities have had no contact with Williams.

Authorities told residents to keep their doors and cars locked, and said officers have been assigned to areas schools. They believe Williams is still in the area.

Lancaster said 175 to 200 officers from multiple agencies have been working on the case and are being assisted by law enforcement in Massachusetts and New Hampshire.

“He is the only one who can answer the questions we have,” Cote said.

Officials said Williams, of Madison, Maine, was scheduled to appear in court Wednesday to face gun charges when he killed the sheriff’s deputy, stole his cruiser and robbed a convenience store.

Helicopters, armored vehicles and police cruisers were spotted around Norridgewock, and schools were locked down as federal, state and local law enforcement poured into the region to look for Williams.

Law enforcement officials said he had arrest records in Maine, Tennessee and Massachusetts.

That image contrasts with Williams’ days at Skowhegan High School, where a yearbook showed he once served as a class officer.

“When in school he was a nice, funny and an all-around good guy,” said classmate Casey Sprout-Costa.

Another classmate, Alex Stetkis, said Williams was an honor student who was class president in his junior year. But things went downhill when he started picking fights and getting into drugs.

“Most could not believe it,” Stetkis said of the news that Williams was suspected in the killing. “He was always kind and could have gone anywhere in life if he hadn’t gotten into drugs.”

Williams’ Facebook page features photos of him smiling at a graduation ceremony as well as other photos of him hiking, hanging out with friends and dressed in a suit at a wedding party. His last post in 2017 noted how he was starting a new job in nearby Anson, Maine.

Residents in Norridgewock, a town of about 3,500, were stunned Wednesday as state police and federal agents investigated a home believed to be where Williams lived with his girlfriend.

“We’re a little on edge. It’s unnerving knowing there’s a guy running around out there,” Tasha Raymond said.

The last time someone killed an officer in the line of duty was in 1989, according to the Maine Department of Public Safety.

Gov. Paul LePage expressed his “deepest condolences” to Cole’s family in a tweet.

“If you live in Somerset County and the surrounding area, please cooperate with law enforcement and stay safe,” the Republican governor said. LePage also directed all U.S and state flags to be flown at half-staff for at least three days.

Cole has a son who also is a Somerset County deputy. Lancaster called Cole, a 13-year veteran of the department, an “outstanding employee, one of the finest deputies.”