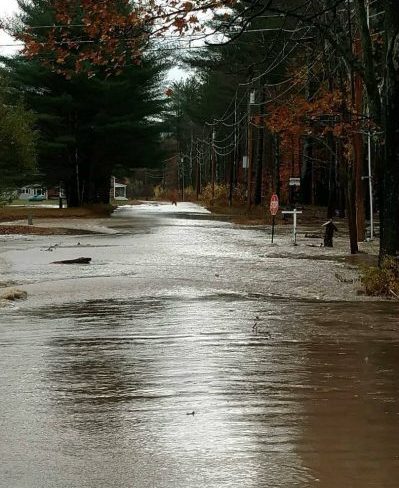 CONCORD, NH – Several New Hampshire Counties will be getting Federal help after the devastating October storm. Governor Chris Sununu announced today that President Donald Trump has granted his request for a major disaster declaration for Belknap, Carroll, Coos, Grafton and Sullivan counties in response to the severe windstorm and flooding that occurred between October 29 and November 1, 2017.

A preliminary damage assessment by The Federal Emergency Management Agency along side state and local officials found the statewide cost exceeded $5,889,549.

President Trump’s declaration allows FEMA to fund up to 75 percent of the eligible costs of approved projects. It also makes federal support available though the Hazard Mitigation Grant Program on a cost-sharing basis for hazard mitigation measures statewide. Federal assistance will be available to government entities and some private non-profits providing critical services.

Governor Sununu said in a press release “Through this major disaster declaration, those most heavily impacted by the storm can have access to federal support for response efforts. I thank President Trump for his timely response to my request.”

“This announcement is welcome news as New Hampshire continues to recover from this disaster,” said Senator Jeanne Shaheen. “As Granite State communities rebuild, this declaration will help ensure they receive the resources and assistance they need to fully recover.”

“New Hampshire suffered a significant financial toll as a result of the storms and flooding last October, and this declaration will provide critical support for Granite State communities as they continue to recover,” Senator Maggie Hassan said. “I am glad that the Trump Administration heeded our call for a Major Disaster Declaration to support Belknap, Carroll, Coos, Grafton, and Sullivan counties.”

“This declaration will provide critical resources to help Granite Staters complete the recovery from October’s storm, and I am pleased that FEMA is assisting in this effort,” said Congresswoman Carroll Shea-Porter. “This is why the federal government needs to be properly funded, so it can help states recover from and repair the damage caused by natural disasters and other events.”

“Communities throughout the state were devastated by the damaging storm last fall and as communities rebuild it is critical that they have the support necessary from the federal government,” Congresswoman Ann Kuster said. “This Emergency Declaration will not only help communities rebuild, but also improve their infrastructure so that they are better equipped to face future storms.”

“We are very pleased to receive this declaration,” Homeland Security and Emergency Management Director Perry Plummer said. “We will be reaching out to emergency management directors within the eligible counties to provide meeting dates, information about the application process, and to assist with applications.”

In response to the storm, Governor Sununu executed the State Emergency Operations Plan with an activation of the State Emergency Operations Center on October 29 through November 3, 2017. The combination of heavy rainfall and strong winds caused severe damage to hundreds of miles of local and State roadways, dozens of bridges and culverts, and left more than 270,000 electrical utility customers without power.

For more details on the Governor’s request, the major disaster declaration and available resources, visit http://www.governor.nh.gov.