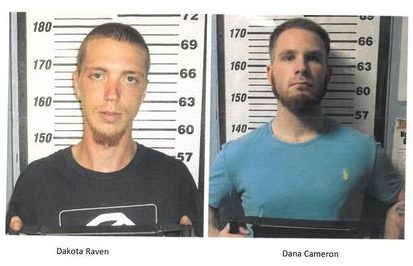 OSSIPEE, NH – On Sunday October 4th, 2020 around 8:00pm, a subject reported a suspicious vehicle near the Westward Shores Campground, Ossipee. When the Ossipee Police Department arrived, two subjects fled from the vehicle on foot.

Ossipee PD requested the assistance of a K9, Carroll County Sheriff’s Deputy Rowe and K9 “Charlie” responded and after about 20 minutes of tracking, K9 Charlie alerted to two subjects hiding in a swampy area.

The two male subjects were taken into custody without incident by the Ossipee Police officers,

The subjects identified as Dana Cameron and Raven Dakota both 24 years old.

On September 30th, 2020, both subjects had fled from the Waldo County, ME, re-entry Center where the two were incarcerated and were wanted since fleeing the Center.

The suspicious vehicle had been reported stolen to the Searsport Police Dept., ME, and was towed from the scene.

The public is extremely important in stopping criminal activity. “See Something, Say Something.” These arrests and recovery of a stolen vehicle were possible because an individual noticed something suspicious and made a call to the Carroll County Sheriff’s Office Regional Communication Center.