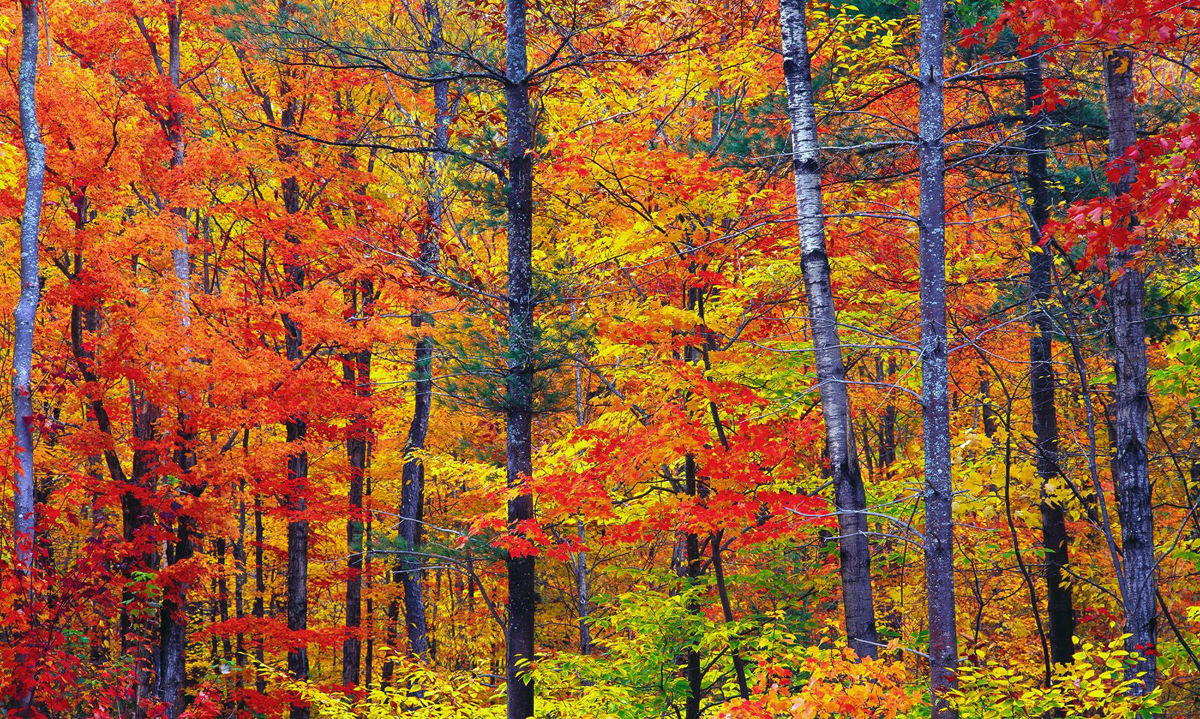 DURHAM, N.H. – If past banner leaf peeping seasons are an indication of future years’ color, this year could be a favorable year for New England’s fall foliage season, according to a scientist with the New Hampshire Agricultural Experiment Station at the University of New Hampshire.

Experiment station researcher Heidi Asbjornsen, associate professor of natural resources and the environment in the UNH College of Life Sciences and Agriculture, explains that in the fall when leaves start to senesce, chlorophyll is degraded. This allows carotenoids, which have yellow, orange, and sometimes red colors, to be expressed. During this time, anthocyanin concentrations, which have darker red to purple colors, also can increase in the leaves.

Historical trends suggest that, in general, good foliage years occur when springs are fairly mild and wet, sufficient rainfall occurs in the summer, and in particular, late summer and early autumn have lots of warm, sunny days and clear, cool nights. Thus far, New Hampshire has continued to experience unseasonably warm days with abundant sunshine, while nighttime temperatures have overall been above average. The forecast for the New England region calls for a continuation of above-normal temperatures associated with the El Nino that NOAA predicts will strengthen this fall and into the winter of 2018-19, since this would keep the polar jet stream further north than usual.

“This year has been relatively wet, with the exception of periods of moderately dry conditions and periods without substantial rainfall between May and July. Certainly, in August we saw frequent rainstorms and overall wet conditions. We also experienced unusually hot and humid conditions this year, but in general, rainfall and sunshine tend to be more important factors determining fall foliage colors than temperature,” Asbjornsen says. “Leaves also have remained relatively healthy this year, due to a lack of widespread pest or pathogen outbreaks, which would tend to support more favorable fall foliage.”

Asbjornsen is also interested in the possible effects that drought may have on NH forests, including potential implications for fall foliage. “There is some evidence from recent studies suggesting that more drought in the autumn can delay peak of redness for some species such as red maple, white oak, while other species may exhibit earlier redness peaks. These include sugar maple, black birch, shagbark hickory, beech, red oak,” Asbjornsen says. “For sugar maple in particular, warmer temperatures during September and October appear to be especially important in producing higher intensity of red leaves. In contrast, more frosts in October tend to reduce red intensities.”

Additionally, certain types of stress, such as droughts, can cause more of these anthocyanins to build up in the leaves, resulting in more intense and vibrant fall foliage colors. Although scientists don’t yet have a good understanding about how the timing and severity of drought may affect anthocyanin production and foliage colors, in general scientists expect that some drought stress during the growing season may lead to enhanced foliage colors.

“Although there hasn’t been much work specifically focused on the effects of moisture stress on fall foliage colors, it’s interesting to note that despite the severe drought that we experienced throughout much of New England in late summer of 2016, the display of foliage colors that year was still quite spectacular,” she says.

Asbjornsen says that the understanding of interactions between all the various environmental factors that affect anthocyanin production and expression is still very poor. “The factors that influence foliage color are complex. For example, there are other pigments in the leaves that interact with anthocyanins and can affect color expression while different species also may show very different responses to the same environmental conditions.”

Going forward, she says the possible effects of climate change – especially increases in the frequency and severity of drought — on foliage color timing and intensity is especially important for ecotourism, and more research is needed in this area.

This material is based upon work supported by the NH Agricultural Experiment Station, through joint funding of the National Institute of Food and Agriculture, U.S. Department of Agriculture, under award number 1003450, and the state of New Hampshire.