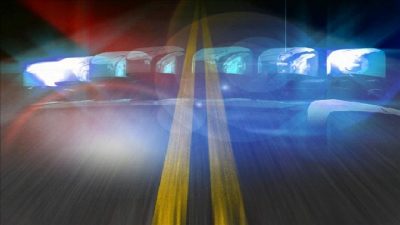 WOLFEBORO,NH – A car accident in Wolfeboro yesterday left one person dead and another seriously injured.

According to Wolfeboro Police just before 4pm a Red Mack Dump truck was headed north on Route 28 when its right front tire blew out, causing the vehicle to go into an uncontrollable hard-right turn, crashing into a large pine tree.

Wolfeboro Police Chief Dean Rondeau said that the tree collapsed, causing part of it to roll over the vehicle, and the truck itself rolled onto it’s right side due to the impact.

The driver of the truck was extracted by rescue crews. The driver was then treated at the scene by EMS and paramedics from Huggins Hospital before being medvacted from the scene to Maine Medical Center.

The passenger, who was riding in the front, was found dead inside the vehicle. Authorities said they believe the passenger died on impact.

Route 28 North was closed to vehicle traffic for approximately six hours while crews worked at the scene.

The identities of the victims were withheld pending the notification of family. Authorities said they do not believe speed was a factor.

A joint investigation is being conducted by the Wolfeboro Police Department and members of Troop G, New Hampshire State Police.