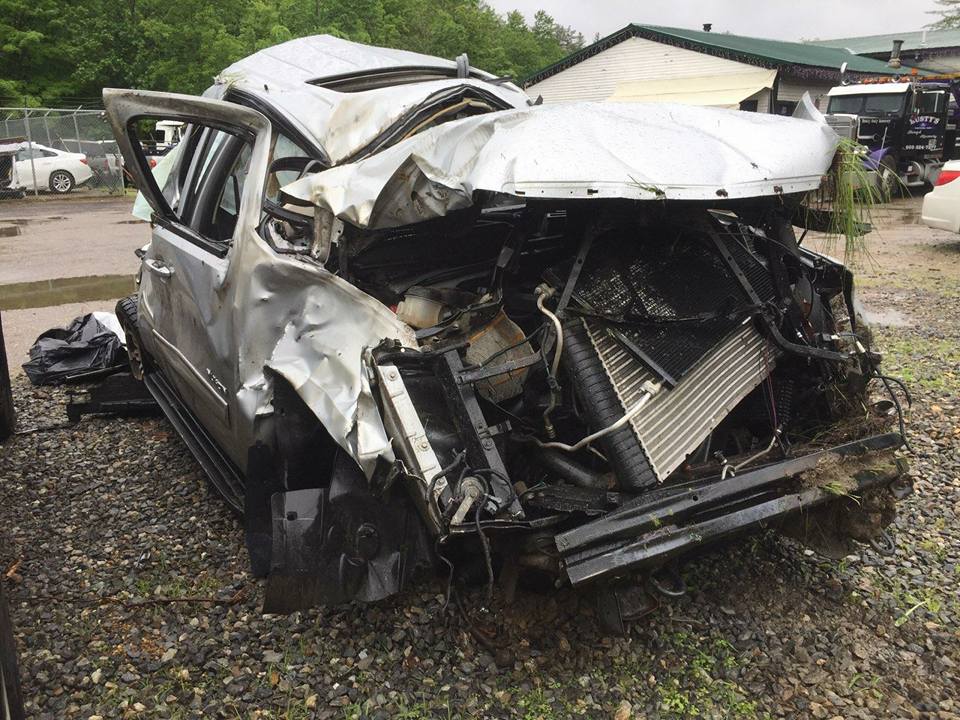 A GMC Yukon was allegedly stolen and crashed by a Juvenile from the Campton Becket Family Service Residential Facility after a home invasion in Campton.~ Courtesy Photo

CAMPTON, NH – A suspect lead police on a chase after breaking into a home in Campton. According to Campton Police Chief Christopher Warm at around 2:20 am Monday officers responded to a reported home invasion on Owl Street.

The homeowner said that a lone juvenile male was found in her kitchen. The individual was later identified as a runaway from the nearby Becket Family Service residential facility. The juvenile was chased from the home by the residents who then called the Police.

While authorities searched for the suspect he entered the garage of the neighboring home where he acquired keys and attempted to leave the area in the neighbors GMC Yukon.

A GMC Yukon was allegedly stolen and crashed by a Juvenile from the Campton Becket Family Service Residential Facility after a home invasion in Campton. ~ Courtesy Photo

The responding officer saw the suspect in the vehicle and attempted to stop it. The suspect refused to stop when the officer signaled him to do so and both Campton PD and State Police pursued the vehicle until the SUV lost control in the New Hampton/Meredith area on I-93.

The suspect only sustained minor scrapes and bruises from the accident and was taken into custody at the scene.

The juvenile is incarcerated at Sununu Youth Detention Center and is to be arraigned in Juvenile Court. The suspect is charged with five counts of delinquency alleging burglary, theft, trespass, and disobeying an officer have been filed against the suspect, with more charges possible as Police continue to investigate the incident.

According to their website the Becker Family Services is “an alliance of nonprofit with the goal of helping struggling adolescents find a “zest for life” and succeed in the “business of life.”

Their Children’s residential treatment services (like the one in Campton) are offered with a goal “to provide education and treatment that enables our students to successfully return home or to alternative community living arrangements, including foster care or kin.”