Concord, NH – New Hampshire officials are asking campground owners to let them know if they have room for campers displaced by Saturday’s heavy rain and flooding.

Perry Plummer, director of Homeland Security and Emergency Management, is asking campground owners and operators who have space to call 211, the system that connects callers to information about health and human service programs.

Plummer also is determining whether volunteer help is available for those who sustained property damage, and he’s asking those who did to call 211 and press ‘8’.

Several campers in the Conway area ended up camping at the North Conway Wal-Mart after evacuating a local campground due to the high water.

Conway, NH – A father and son are safe getting trapped on the Swift River. According to Conway Fire Chief Steve Solomon at around noon Saturday an 11-year-old boy got trapped in the rapids at the Lower Falls swimming area off of the Kancamagus Highway.

The boys father jumped in to help him from the water onto some rocks but ended up on a small piece of ledge and was unable to get back to shore.

Swift River rescue swimmers from the Conway Fire Department crossed the Swift River to the stranded pair and were able to get them to safety using life jackets, helmets, and ropes. The New

Hampshire State Marine Patrol issued a warning urging those recreating in rivers and streams to use caution saying that as a result of the rain the currents will be greatly increased. Adding that floating and underwater debris could prove inherently dangerous to those using the waters.

Wemyss has served as General Manager of the oldest man-made attraction in the United States since 1987 and was instrumental in bringing the Mt. Washington Hillclimb back in 1990 after a 29 year hiatus. Having first been run in 1904, the Climb to the Clouds, as it’s often referred, is the oldest automotive hillclimb in North America.

Joining the Mt. Washington Auto Road in 1977, Howie Wemyss started his career as a Stage Driver giving guided tours to the summit of Mt. Washington for a number of years before being asked to assume the General Manager’s position in 1987.  Always fascinated with the history of the Auto Road, Wemyss stated recently “I was particularly impressed with Bill Rutan’s 13 minute, 9 second record run from 1961, a record I would talk about on every tour I gave as a Stage Driver. He was a legendary figure in our minds. Shortly after becoming General Manager I was approached by Frank Jost, who at the time was working at the new car museum in Intervale, NH, about putting together an antique car race.  I started getting excited about the possibility of racing here again after all those years – even if it was a vintage race.  We hadn’t gotten all that far in planning when Robert Brotherus appeared in my office one day, wanting to talk with me about a full blown race. He had somehow gotten legendary rally driver John Buffum’s ear and expertise and was able to present a pretty compelling story to a very willing audience. After much internal discussion, in 1990 we brought back this amazing race.”

Since the 1990 Climb to the Clouds, which attracted twenty or so drivers to Pinkham Notch to test their skills against the mountain after a 29 year hiatus, the event has grown exponentially thanks to Wemyss’ guidance and vision, along with the constant support of the owners of the Mt. Washington Auto Road.

Throughout the 1990s, the hillclimb continued to grow, attracting as many as 60 top notch road race, rally and hillclimb drivers from across the United States and Canada for each event as well as a growing crowd of spectators.  New records were set along the 7.6 mile course – first by local rally driver Tim O’Neil from Whitefield, NH in 1990 when he set a fastest time of 7 minutes 45 seconds piloting a rare all-wheel-drive Volkswagen Rally Golf. Record times continued in 1991, 1992, 1993 and 1995 – with multi-time Canadian rally champion Frank Sprongl recording a time of 6 minutes, 41.99 seconds in 1998 driving a 400 horsepower Audi Quattro S2 – a record that would stand for thirteen years.

In 2004, in recognition of the centennial of the first hillclimb on Mt. Washington in 1904, the race was resurrected as a vintage only event that gathered over 25 vehicles with past Mt. Washington hillclimbing and auto racing history.

In 2011, the Climb to the Clouds was seen as one of the key events needed in a summer long celebration in support of the Mt. Washington Auto Road’s 150th anniversary.  With organizational assistance from the Sports Car Club of New Hampshire and Vermont SportsCar, the Mt. Washington Hillclimb roared back to life after ten years attracting nearly 75 cars and drivers from across the United States, Canada and Europe.  This time, multi-time Rally America National Champion David Higgins from the Isle of Man set a new record time of 6 minutes 11.04 seconds driving a Vermont SportsCar-prepared 2011 Subaru WRX STI for Subaru Rally Team USA.

With the excitement for the race now rekindled, Wemyss met with members of the Sports Car Club of New Hampshire to discuss the possibility of bringing the Nation’s oldest hillclimb back to Mt. Washington every three years or so.  In 2014, with 80 teams making their way to Pinkham Notch from across North America and the United Kingdom, yet another record was set on the Northeast’s tallest peak – a blistering fast time of 6 minutes, 9.09 seconds set again by Subaru Rally Team USA’s driver, David Higgins, along with his talented co-driver, Craig Drew, driving their 2014 Subaru WRX STI.

In 2017, Wemyss and his talented team at the Mt. Washington Auto Road will once again work with the Sports Car Club of New Hampshire to welcome back 80 teams to Green’s Grant in Pinkham Notch, just 8 miles south of Gorham, NH, when the Subaru Mt. Washington Hillclimb returns to the Auto Road July 7-9, 2017.  With 18 or more states represented as well as the countries of Romania, Finland, Scotland, Ireland, Canada and Australia, as well as the United States of America, the event will be the most international automotive hillclimb the Mt. Washington Auto Road has ever held.

“The history of this event is wonderful”, stated Wemyss. “It’s a unique race that appeals to a niche of people who want to challenge themselves on this road, and we’re happy to have people be able to take on that challenge. But aside from that we can’t do this without it making sense from a business prospective – so we hope to do well financially and/or get great publicity that will help make sense of the fact that we close the Road to the public for two half days and one full day in July.” When asked what his hopes were for the 2017 Subaru Mt. Washington Hillclimb, Wemyss replied, “A safe event, great weather, happy sponsors, organizers and fans – and a sub six minute run!”

For more information regarding the 2017 Subaru Mt. Washington Hillclimb, including the events history and list of record times or how to purchase spectator tickets to view the race from the base area or along the course visit www.climbtotheclouds.com.

Fryeburg, ME – A Maine woman was injured after she crashed into the John Stevens Monument in Fryeburg. Authorities said that at 12:30 Saturday morning 68-year-old Dianne Beausoliel of Denmark drove her Toyota Rav 4 into the John Stevens Memorial located at the intersection of Main Street and Portland Street. 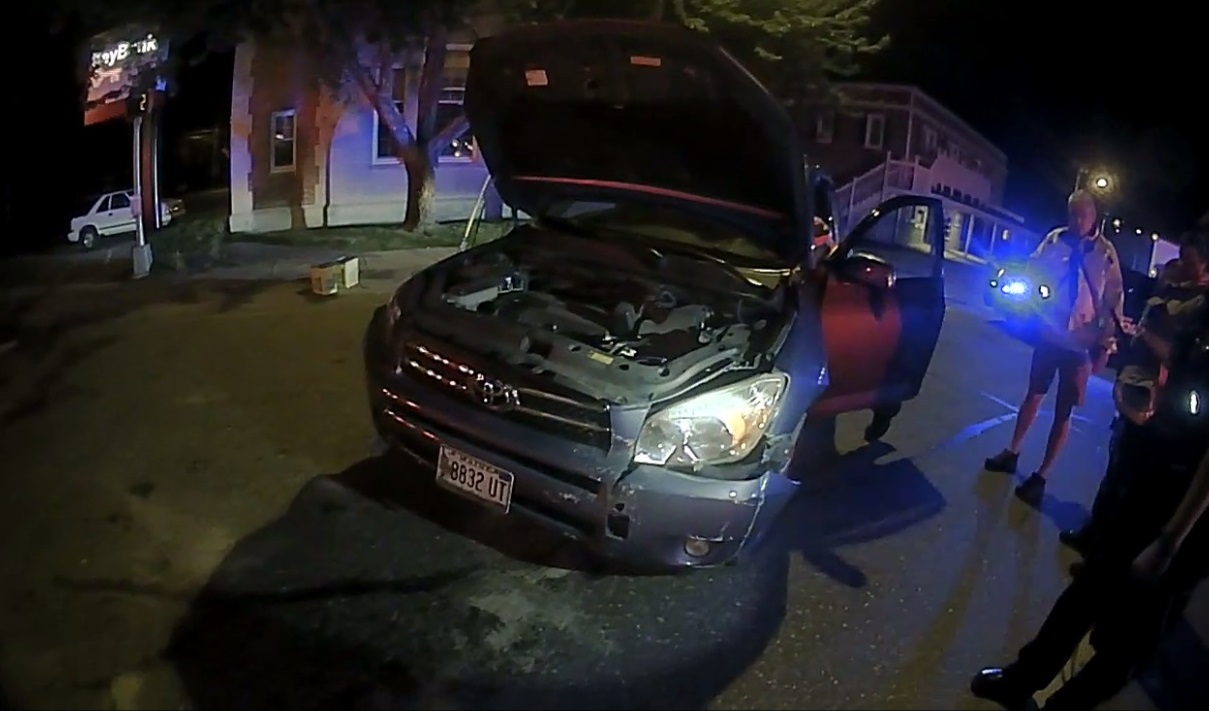 Beausoliel was transported to Bridgton Hospital for non-life-threatening injuries. Police charged her with operating under the influence and reckless conduct.

Fyreburg Police Chief Joshua Potvin said “Witnesses say the vehicle accelerated and swerved into the monument without braking. We have submitted a blood sample from the operator to determine her blood alcohol level. My investigating officers had probable cause to believe the operator was impaired.”

Chief Potvin added that “We believe the 28 ton granite monument is still stable however, it has shifted clockwise approximately three inches due to the impact.”.

He also said “Town officials are obtaining estimates on the damage to the monument and that cost is unknown at this time.”. 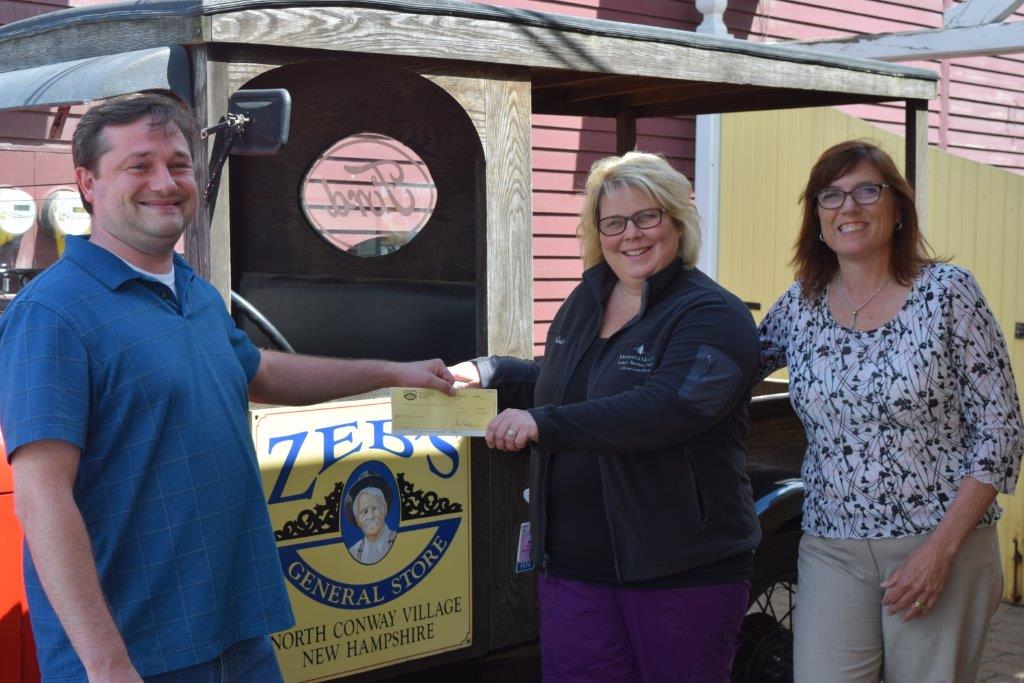 Conway, NH – A local business is helping to look out for the valleys tiniest residents. The Zeb’s Foundation donated $2,000 towards upgrading electronic baby monitors for the Family Birthing Center at Memorial Hospital.

For babies requiring extensive resuscitative measures at birth, the new baby monitors will allow clinicians to monitor their vital signs.

The new monitors will also allow the staff to send data for consultation electronically to specialists at other facilities, potentially avoiding the need to transfer these infants to other hospitals for more advanced treatment. 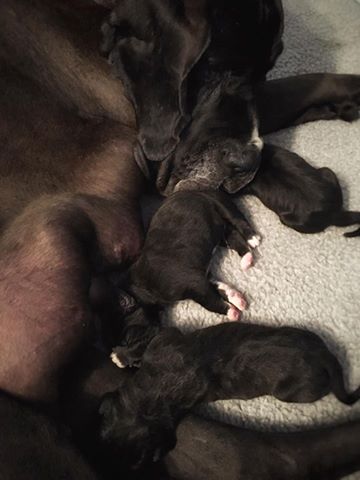 Conway, NH – Nine of the seized Great Danes became twelve over the weekend. The Conway Area Humane Society posted on their Facebook page that one of the 84 Great Danes rescued from an alleged puppy mill in Wolfeboro unexpectedly gave birth to three puppies Friday.

5-year-old Ellie is one of the 9 dogs seized during the investigation leading up to the seizure of the 84 dogs.

Workers at the humane society noted that she was lactating when they brought her in but suspected it was due to a false pregnancy since she didn’t appear to be carrying puppies. Then Friday morning Ellie began showing signs of labor, and a little while later the rescued dogs went from 84 to 87.

The Humane society said that the happy family is currently in a foster home and expressed thanks for all the supplies and support from the community.