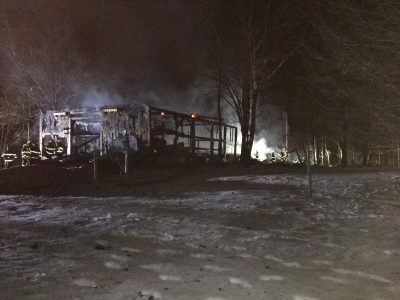 WOLFEBORO, NH – No one was injured, but an historic barn was destroyed in a fire in Wolfeboro Wednesday.

Wolfeboro Fire-Rescue said they were alerted to the blaze on North Main Street at around 11:11pm.

According to reports heavy fire and smoke was visible from many parts of town. A first alarm was immediately requested.

When fire crews arrived on scene they found a barn, owned by Elizabeth Nordbeck, fully engulfed in flame with a home about 50 feet away. Crews were able to prevent the fire from reaching the home.

The fire was declared under control just before 1am. The cause of the fire remains under investigation.