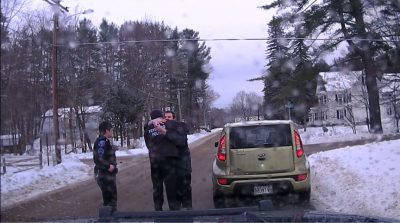 Chief Josh Potvin and Sergeant Heidi Johnston presented an unsuspecting citizen with gift cards. The driver showed his appreciation to the Chief and Sergeant with a hug.~ Photo courtesy of Fryeburg Police

FRYEBURG, MAINE – Fryeburg Police Officers have been issuing holiday spirit instead of citations. Most of the time when someone gets pulled over the last thing they want to do is hug the officer, however that wasn’t the case in Fryeburg this week. As unsuspecting drivers were pulled over they ended up receiving gift certificates instead of tickets.

The gift certificates, which included signed messages from full time officers, were donated by local businesses in support of the Police Departments goal of giving back during the holiday season.

Fryeburg Police Chief Joshua Potvin said that the traffic stops were for minor traffic violations and it is up to the officer’s discretion whether to give a gift.

Chief Potvin said “First reactions so far have been pretty emotional. Most drivers have either asked if they can have a hug or just say they just want to hug us and do it. This is what community policing is all about.”  adding ““We wanted to do something during this holiday season to give back to our citizens.” 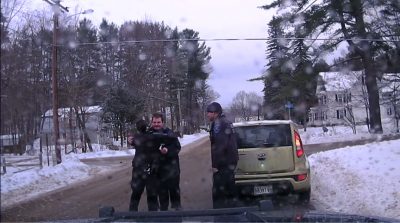 One recipient of the holiday treat was so overwhelmed with joy that he can be seen giving Chief Josh Potvin and Sergeant Heidi Johnston a hug on body cam footage.

The recipient later commentedt on the Fryeburg police Facebook page saying aid “I am still speechless by the random act of kindness from the Fryeburg Police Department today. I appreciate all that you do to keep us safe. Thank you again, not only for the card, but also helping restore my faith in humanity.”

Click to check out the body camera and cruiser footage of the drivers surprise.