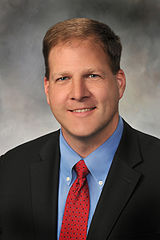 CONCORD, NH – New Hampshire’s Governor sent a message to Washington today in reference to the possible Government shut down titled “Do Your Job”.

In his letter Governor Chris Sununu said that the Senate has the opportunity to reauthorize the Childrens Health Insurance Program, which provides health coverage to eligible children, through both Medicaid and separate CHIP programs.

Governor Sununu said “Now is the time to put politics aside so that we can work towards a solution that gives New Hampshire’s children access to the healthcare they need, especially during their most vulnerable and formative years,”

The Governor continued “The Senate has the opportunity to reauthorize CHIP for six years – the longest reauthorization of health insurance for American children in history. I implore Senators Shaheen and Hassan to vote for today’s continuing resolution.”

He ended the letter saying “DACA is a serious issue that should be addressed, but not at the expense of shutting down the federal government and jeopardizing children’s healthcare. “