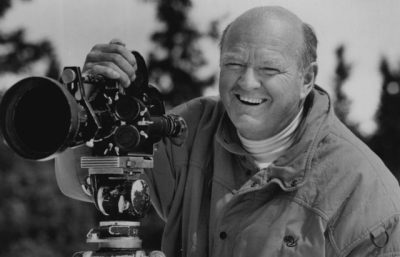 ORCAS ISLAND, WASHINGTON -Snow Sports filming legend and pioneer Warren A. Miller has died. According to the Seattle times Miller died Wednesday at his home on Orcas Island at age 93.

Miller, whose name is synonymous with snow sports, produced over 500 adventure sports films during his career. His films often featured the best skiers and snowboarders dropping in via helicopter from jaw dropping heights onto beautiful alpine landscapes.

According to his Autobiography his love affair with film began at age 12 when he purchased his first still camera. He began photographing his fellow Boy Scouts and selling them prints. The novel read that, that “marked only the beginning of what was to be a very, very expensive habit of documenting my world,”

Mr. Miller was a self-taught filmmaker began his career in snow sports cinema after leaving the United States Navy where he served on a submarine chaser during World War II.

His first film, which set the tone for the annual tradition of starting the season with a Warren Miller movie, was “Deep and Light,” which debuted in the winter of 1949-50 in Port Angeles Seattle.

In a 2010 interview with The Seattle Times, they wrote that Miller would be happy if his get-up-and-go mantra ended up being his legacy. Saying “I really believe in my heart that that first turn you make on a pair of skis is your first taste of total freedom, the first time in your life that you could go anywhere that your adrenaline would let you go, And I show that in my films. I didn’t preach it. But once you experience that freedom — I’d personally narrate that show over 100 times a year — and I came to the conclusion that man’s search for freedom is embedded in our genes. That’s what everybody wants.”