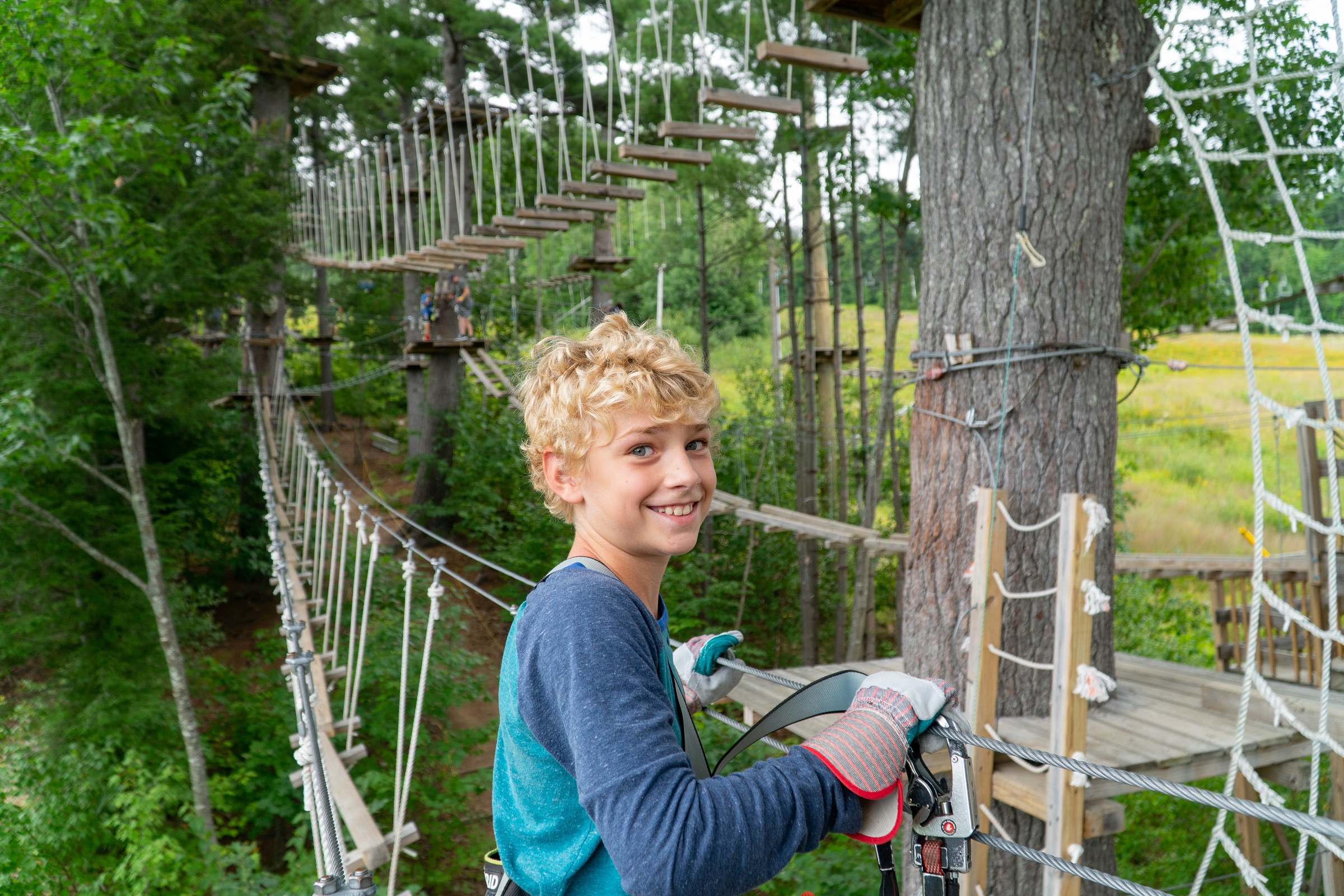 Kids enjoy time at the Cranmore Adventure Park during the last days of summer.  Photo provided by Cranmore Mountain Resort.

NORTH CONWAY, NH – North Conway, NH – The verdict from businesses responding to an informal survey from the Mt Washington Valley Chamber of Commerce was unanimous – the Labor Day weekend was stellar for those hoping to spend time seeking adventure in the Valley over Labor Day weekend and the businesses that served them. Great weather drove visitors to the Valley for the last days of summer.  All those businesses responding the survey were enthusiastic about the increases in sales over last year’s Labor Day weekend, mostly attributing the change to weather.  When asked about summer business overall, many business owners felt tourism in the Valley was impacted by inaccurate weather forecasts calling for rain that never came.   Yet, most survey respondents were able to end the summer even with last year.  Overall, there is optimism for the upcoming fall tourism season in Mt Washington Valley.

Weighing in from the Valley’s attractions businesses first was Bob Tupper, owner of White Lake Speedway, Inc Family Fun Center in Tamworth, NH.  Reasonable temps and good weather over the weekend resulted in a 40-percent increase in revenues at the Speedway over last year’s Labor Day weekend. “The word about our new indoor air conditioned/year round laser tag arena is finally getting out there. Everyone likes playing and tell us they’ll be back!” shared Tupper. Overall, summer 2018 was even with summer 2017, said Tupper, who largely attributed a lack of growth to the hot temps in July, and inaccurate weather reporting about rain that never materialized, but kept visitors home.

Story Land had a very strong Labor Day weekend, according to Director of Marketing, Lauren Hawkins. “The Valley was busy, and the weather was great. Compared to 2017 we were about even for the holiday weekend,” she told the chamber.  “The Labor Day weekend crowds in 2018 spread out more evenly over Saturday and Sunday due to a better forecast. In 2017 we saw rain on Sunday which pushed guests to visit on Saturday or Monday,” shared Hawkins. Story Land’s weekend was topped off with the  6th Annual Memorial Hospital Fun Run to benefit Believe in Books Literacy Programs, with 377 school-aged children taking part in the event, according to Erin Sweeney, Believe in Books Marketing and Media contact. Each year the Fun Run is the kick off to a school-year long initiative to bring Memorial Hospital’s “Let’s Go” health and wellness education and activities to students throughout Mt. Washington Valley, stated a press release sent by Memorial Hospital. Hawkins finished her observations with a look back at the summer. “Overall Story Land had a great summer considering the extreme heat and poor forecasts. Compared to 2017 we are even at this time but expect to have a great fall if the weather cooperates,” she shared.

Jonathan Rivers weighed into the Chamber’s survey from Indian Mound Golf Club saying that amazing weather and great course conditions led to a record breaking Labor Day weekend and the second of two back-to-back great summers. “Even with the heat, we were busier than expected this summer,” said Rivers. In addition, fall bookings are way up for the club and Rivers expects special offers for seniors and military plus special men’s and women’s days to contribute a strong fall foliage season too.

Becca Deschenes, Director of Marketing at Cranmore Mountain Resort, shared the park too had an amazing Labor Day weekend.  “We were rocking over the weekend, with Saturday being our busiest day of the summer, and second busiest day over the last three summer seasons,” she shared adding that the Cranmore Adventure Park saw a 30-percent increase in the 3-day Labor Day weekend sales over last year.  When asked about the summer, Deschenes added, “We have been able to make up decent ground over the last two weeks of August. It has definitely been an odd summer weather-wise; either being extremely hot or forecasted so.  But this weekend couldn’t have been better.   If Mother Nature plays fair, and cooperates with the weather this fall, we’ll be able to get closer to where we finished last season,” she added.

Jack Fagone, Director of Marketing for Attitash Mountain Resort and Wildcat Mountain told the chamber that both mountain attractions had great holiday weekends, with an increase in visitation over last year, citing good weather as a contributing factor. “Overall, we were happy with the results of Summer despite seeing a slight dip in visitation compared to last year to date. We are looking forward to carrying momentum into the fall season. Both resorts are open on weekends through Columbus Day, shared Fagone.

From the lodging community, Christopher Bellis, co-owner of the Cranmore Inn in North Conway, shared that the inn’s Labor Day weekend bookings were up by 8-percent over last year, mainly due to the nice weather.  When asked about the summer season, Bellis replied, “Our summer was ultimately the best summer we have had since we got here six years ago with growth of 6-percent over 2017, although we noted that people were waiting longer to book their vacations this year.”  While September advance bookings are slightly lighter than last year at the Cranmore Inn, October is already up by nearly 10-perent over last year, says Bellis, who looks forward to a strong fall foliage season.

At the Inn at Thorn Hill & Spa in Jackson, Steve Lambert, co-owner, shared that the Labor Day weekend was up 18-percent over last year due in large part to to an increase in wine cellar dining packages sold.  He also noted that watching the inn’s guest pinning map he’s noted a large increase in  Western European guests.  In addition, summer numbers were up over last year too due to longer average stays.  Lambert is optimistic about the fall season, noting that spending on advance reservations has increased over last year with higher-end room choices and dinner-included packages.

Timothy W. Psaledakis, owner and jeweler at Jewelry by Timothy Psaledakis and Friends in North Conway Village, replied to the chamber’s survey with enthusiasm for both the Labor Day weekend and summer season.  “This holiday weekend was nearly double the same weekend last year,” he shared, attributing the increases in sales to a stronger economy, favorable weather and the addition of  ‘while you wait’ services performed on fine jewelry in the store.  In addition, Psaledakis told the chamber that he’s seen a 50-percent increase over last year in sales for the summer season. “I’m a sole proprietorship and retired from my guard unit last August- the result being that I’m in my store much more,” he shared.

Looking forward to the fall foliage season in Mt Washington Valley, Janice Crawford, Executive Director for the Mt Washington Valley Chamber of Commerce, predicts the Valley could be on its way to a possible record breaking autumn if all things fall into place.  “With gas prices falling and leaves in relatively good condition throughout the Valley, we’re looking forward to a strong fall foliage season.  Hearing that advance reservations are up for leaf peeping season, we feel that as long as the weather is sunny and bright – and the forecasts match – we could see another record fall foliage season in the Valley.”

According to a late August press release, the American Auto Association (AAA) forecasts that the national gas price average will drop to $2.70 this fall with the possibility of dropping even more. “That is 14-cents less a gallon compared to today’s price and more than a quarter cheaper than this year’s recorded high of $2.97 set in May,” says Jeanette Casselano, AAA spokesperson.

New England fall foliage prognosticators at Yankee Magazine have put weather conditions from January’s frigid temps and an unprecedented unusual late-February thaw together with dry weather in May through June and then a wetter-than-normal summer plus the impact of a developing El Nino into a prediction for all foliage. According to Jim Salge, spokesperson for New England Foliage, “Putting this all together, we are fairly confident that the leaves will be bright, bold, and healthy when they begin to change in most areas, and a colorful, vibrant show should be on tap across most of New England this year. We also believe that the leaves, especially up north, will turn a bit later than historical averages.” A later leaf-peeping season bodes well for Mt Washington Valley.