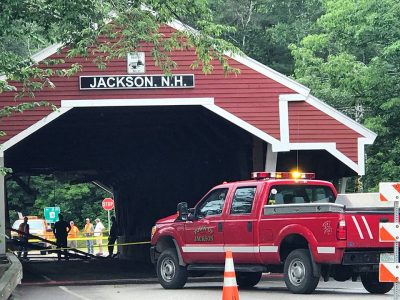 A cement truck allegedly drove into and damaged the Jackson Covered Bridge Tuesday morning. ~ Photo courtesy of the Jackson Area Chamber of Commerce

JACKSON, NH – The Jackson Covered Bridge has been closed once again due to a vehicle collision. According to the Jackson Police Chief Chris Perley a fully loaded Alvin J. Coleman & Son cement truck heading east toward Jackson Village struck the bridge around 7 o’clock yesterday morning damaging it and forcing officials to close it.

Department of Transportation officials said the truck damaged at least four of the bridge’s cross braces and it will take several weeks until the bridge can be reopened. DOT workers said they made some emergency repairs in preparations for the weeks stormy weather in order to protect the rest of the bridge.

Police identified the driver of the truck as Scott H. Butler, 58, of Tamworth. Butler was issued a $62 summons at the scene for disregarding lawfully posted traffic control devices and he could face more charges as the Commercial Truck Unit of New Hampshire State Police investigate the incident.

The Jackson Area Chamber of Commerce said that the Covered Bridge Dance planned for Saturday August 4th will still happen whether or not the bridge is closed.

The bridge was already closed once before this summer due to a collision. On Saturday, June 30th the bridge was closed after 18-year-old Olivia T. Frechette of Conway drove into a support and first truss of the bridge.

Frechette was later charged with speeding, 35 mph in a 15 mph zone, and with the use of an electronic device while driving.