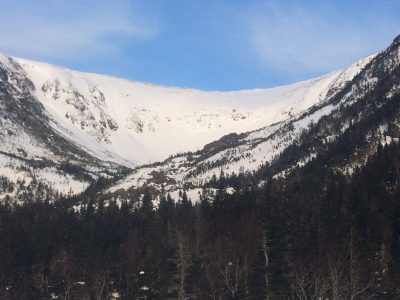 SARGENT’S PURCHASE, NH 1 – The Mount Washington Avalanche Center said there is Considerable avalanche danger in Huntington and Tuckerman Ravine. The cautions come after there were three avalanches triggered by skiers recreating on the highest peak in the north east.

The first was in Lobster Claw with no reported injuries and then minutes later a second one was triggered on Hillman’s Highway that caught and carried at least 5 people, with one injury reported.

On Sunday another skier triggered avalanche occurred in Center Bowl, luckily no one was reported caught, carried, or injured.

The center advises all of those looking to recreate on the mountain said careful snowpack evaluations, cautious route finding, and conservative decision making are essential. They added that anyone looking to be on the mountain should carry a beacon, a shovel, and a probe and know how to use them.

For the most up to date avalanche danger level on Mount Washington and for more information about the avalanche safety go to mountwashingtonavalanchecenter.org