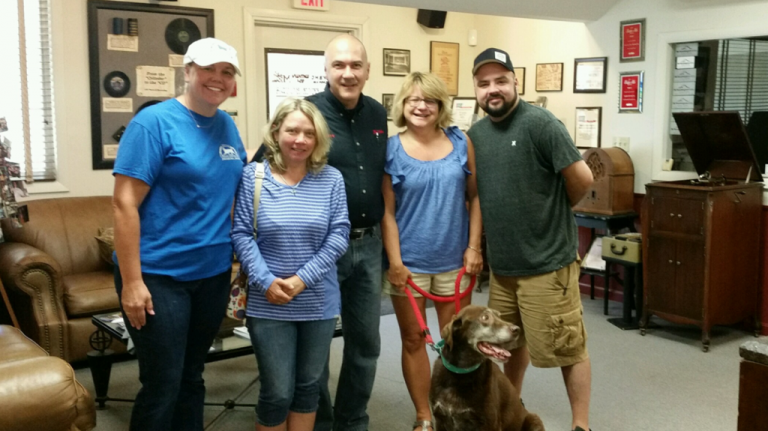 Conway, NH – A local radio contest winner gave up her prize to help two local animal shelters. WVMJ Magic 104 fm teamed up with Lucy Hardware to give away a year supply of Natural Balance Dog food to one lucky winner. Out of the close to 90 photo submissions Fisher Brown’s picture was chosen as the winner. 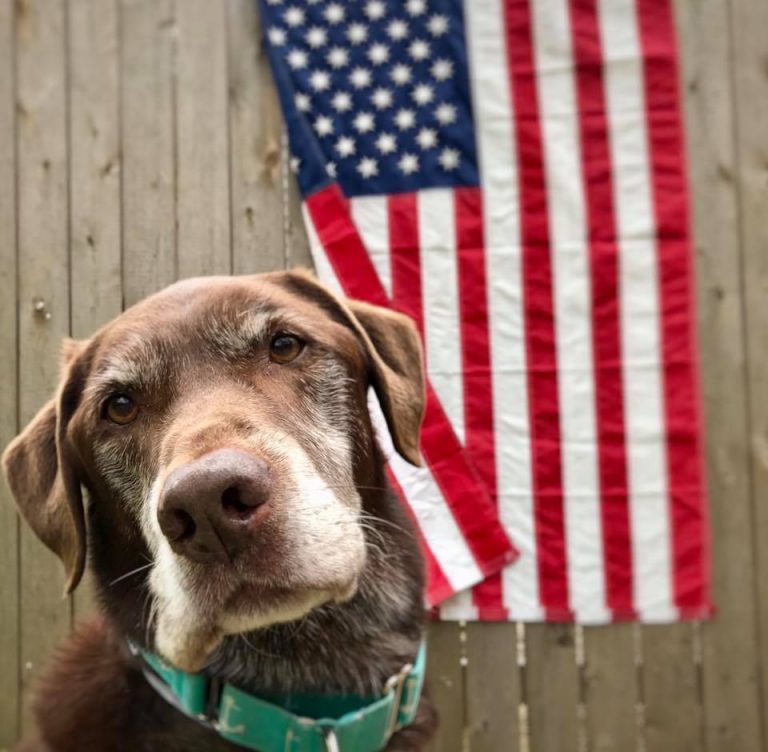 The winning photo of Fisher Brown.

Stacey Klimkosky Fisher’s owner was delighted to win however at the time Fisher Brown was dealing with some serious health issues. Klimkosky said “He was diagnosed with lymphoma in March and my vet didn’t really know if he would have 3 days, 3 weeks or 3 months.” She added “I am able to provide good for him (Fisher Brown). Not everybody is able to do that, and I just wanted to just give back to the community.” So in light of this Klimkosky decided that she would donate her prize of a 28lb bag of Natural Balance Dog Food a month for a year to local animal shelters. 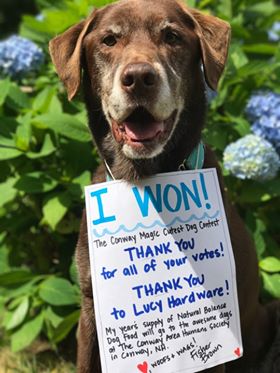 After hearing about winning Fisher Brown and his owner Stacey Klimkosky announced that they would donate their prize.

Inspired by Klimkosky’s generous donation Dave DiMatteo from Lucy Hardware wanted to help out as well. Dimatteo said that instead of giving Klimkosky a single 28lb bag of Natural Balance Dog Food a month for a year, he would split the prize giving 6 bags of food to the Conway Area Humane Society and 6 bags to Harvest Hills Animal Shelter all at once so they could use it immediately. Dimatteo also wanted to inspire others to help local shelters so he decided to give them some incentive. Dimatteo said “Anyone that adopts a dog from the shelters, if they bring in their adoption certificate, we’ll give them 20% off their first year’s worth of Natural Balance Dog Food. The other thing we’re going to do is if someone wants to donate food to the shelters we’ll give them 20% off when they purchase it, then I will run the food over to the shelter of their choice.”

Joan McBurnie from Harvest Hills Animal Shelter that their shelter is currently full and the large sum of food will really help out. Saying “Every bit of food helps. The high quality food is definitely a plus for us. That is going to last us quite a while”.

In June Magic 104, Lucy Hardware, and Natural Balance Dog Food held the Cutest Dog Photo Contest. Listeners were asked to submit a cute photo of their four legged friends in order to win a years supply of Natural Balance Dog Food. 88 Photos were submitted and then narrowed down to a top 5. The top 5 were then posted up on the Magic 104 website for listeners to vote on for a week. Fisher Brown won with 35% of the 795 votes.

To help, donate, or learn more about the Conway Area Humane Society and Harvest Hills Animal Shelter visit their respective websites at conwayshelter.org or harvesthills.org.