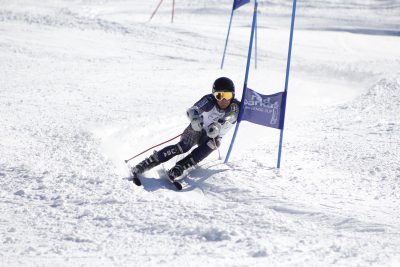 ~ Photo courtesy of Laura Lemieux, photo from the 2017 race.

BARTLETT, NH- The Red Parka Pub Challenge Cup Committee is setting a tone this year for the running of the 45th Annual Challenge Cup Race, taking place on March 16, 2018. The committee is looking to shatter its fundraising goal of $10,000 and “bump it up” to $15,000 this year. The race, which is held at Attitash Mountain Resort, is the second largest fundraising event for the Eastern Slope Ski Club, a nonprofit that provides ski equipment and helps in ski development programs in the Mt. Washington Valley.

The committee plans to reach its goal through new fundraising strategies including a PledgeReg, where racers can raise additional funds beyond the racing fee to compete for prizes. The race fee is $65 in advance and registration takes place online at skireg.com. Racers can opt-in for the PledgeReg and those that raise $300 or more will have their race fee waived. Individuals or teams are both eligible to compete for separate grand prizes for raising the most money.

Keeping with its theme, “Bump It Up” will be the race slogan this year and the committee is working on new race swag for spectators and racers to purchase during the event. Proceeds from merchandise sales would go to the cause.

In addition, the Bib Draw Night which takes place on Thursday, March 15 at 6 p.m. is open to the public and includes a ton of raffles. All pub patrons are eligible to enter the raffle.

“We want to make it accessible for everyone to experience the fun of the Red Parka Race, and a lot of that happens off the hill,” said Terry O’Brien owner of the Red Parka Pub and Event Director. “So, even if you can’t race this year, you can stop by the pub on the night before The Cup and contribute to the cause!”

The Red Parka Pub Challenge Cup Race is a 21+ race. The registration fee is $65 and includes a lift ticket, guaranteed two runs on the course, an official race hat, a raffle ticket and a free dinner at the Awards Ceremony served by the Red Parka Pub in Ptarmigan’s Pub after racing concludes. Registration is now open and a link can be found on redparkapub.com. Race day registration is $75.